Tori & Uki stand on opposite sides of the Tatami, with Joseki to Tori`s left.

Tori & Uki bow onto the Tatami, take three steps forward, leading with the left leg, and stop, assuming the position of Shizen Hontai.

They bow to each other, turn to face Joseki, and both bow simultaneously.

Tori & Uki then take one step forward, leading with the left leg, assuming the position of Shizen Hontai.

They are now both ready to perform itsutsu kata

Tori then walks towards Uki, left leg first, raising his right arm, (to almost Koka position) with outstretched hand, and placed the hand on Uki`s high chest as they get level.

Tori then applies a little pressure to Uki`s chest, by firstly pushing the thumb, and then the little finger into Uki`s chest.

As the pressure increases, Uki takes a small step backwards with the left foot, and then right foot, to try and regain balance.

Tori makes three steps in all, before his arm is outstretched enough to knock Uki off balance, and to the floor, keeping his own balance in tact.

When Uki fall, he does a Jizo-Daore breakfall (dropping like a stone).

As Uki rises from the floor, whilst in one knee up position (right knee raised), Uki opens his right hand into a knife forming position, and attacks Tori`s central abdomen, by pushing his left leg from the kneeling position, and thrusting with his hand.

Tori side-steps, by moving his left leg into a circular position backwards, taking hold of Uki`s right thrusting hand, with Tori`s left, and Tori also places his right hand onto Uki`s thrusting arm, near the sleeve/elbow area, pulling Uki off balance, with the circular movement, as Tori drops onto his left knee.

Uki does not take off from the ground, but is pulled sideways, and has to make a left hand breakfall, back up into a kneeling position.

Both Tori & Uki finish this Form in a kneeling position.

Both Tori & Uki open out their arms, raised slightly above the shoulders, palm of hands facing forwards, rise, and start encircling in an anti-clockwork direction around the Tatami, reducing the circle, until arms are entwined (Tori`s right arm under Uki`s, and Left arm over Uki`s), and both Tori`s feet are to the side of Uki`s right foot.

Tori grips Uki`s left sleeve, and drops, forcing Uki down, into a rolling breakfall, towards the centre right corner of the Tatami.

Uki rolls into an upright Shizen Hontai position, facing outwards near the corner of the Tatami, and remains there.

Tori rises, and walks to the opposite corner, assuming Shizen Hontai, facing outwards.

Tori crouches, pivots around on the balls of his feet, raises both arms high above shoulder level, palm of hands facing outward, steps back with his right leg as he drops the arms to his left side, still crouching, then runs towards Uki`s left side, with arms still to the left, gaining momentum of pace, and slips approx 1 meter past Uki.

As Tori stops, he raises his arms high into the air, at the same time going on tip toes, coming back down onto both feet, and arms dropping to just above shoulder level, palm of hands facing downwards.

Tori then starts to move backwards, left leg first, until his arm reaches Uki`s high chest, where he stops for a brief second, then applies pressure with his straightened elbow, to Uki`s chest, pushing him slightly off balance, forcing Uki to take a backward step, then another, Tori then moves backwards, increasing the pressure, until Uki falls, and Tori drops to his left knee, lowering his left arm, then his right arm.

Both raise arms to just above shoulder level, and both pivot around on the balls of their feet, into Migi Shizenhontai. Then both start running towards each other, with arms still raised. As they are about to collide, Tori falls/slides sideways, feet to the left, ending up with his body facing the direction he came from, with both hands on his lower abdomen/stomach, forcing Uki into making a rolling breakfall over him, rolling into the upright Shizen Hontai position.

Uki then returns to the Tatami on side he just came from, where he first started at the beginning of the Kata. Tori returns to the opposite side, facing Uki.

Both take one step backwards, leading with the left leg, then bow to each other, turn and face Joseki and bow, then keep stepping backwards until they reach the edge of the Tatami, again, bowing to the centre.

This completes the five Forms, however, much practice is needed, to improve the Kata to a reasonable level, and both Tori & Uki should become as one when practicing.

There were originally a few different versions of this Kata, containing other movements, but they were altered to the above, which was accepted by the Kodokan as being the Itsutsu-no-Kata to practice.

This site uses Akismet to reduce spam. Learn how your comment data is processed.

There are no upcoming events.

Promoting Judo spirit and practice in the community 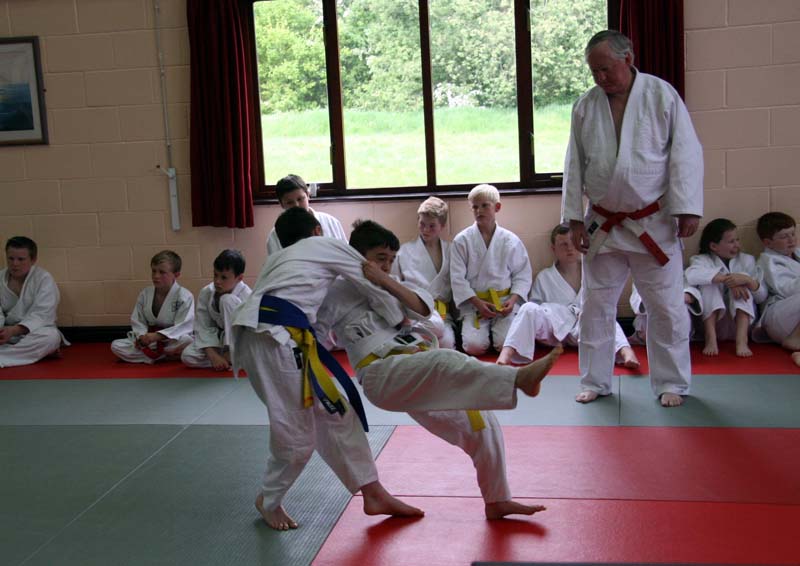 This website uses cookies to improve your experience while you navigate through the website. Out of these cookies, the cookies that are categorized as necessary are stored on your browser as they are essential for the working of basic functionalities of the website. We also use third-party cookies that help us analyze and understand how you use this website. These cookies will be stored in your browser only with your consent. You also have the option to opt-out of these cookies. But opting out of some of these cookies may have an effect on your browsing experience.
Necessary Always Enabled
Necessary cookies are absolutely essential for the website to function properly. This category only includes cookies that ensures basic functionalities and security features of the website. These cookies do not store any personal information.
Non Necessary
Any cookies that may not be particularly necessary for the website to function and is used specifically to collect user personal data via analytics, ads, other embedded contents are termed as non-necessary cookies. It is mandatory to procure user consent prior to running these cookies on your website.
Other
Save & Accept